Aged Balsamic originates from two designated regions of Italy — Modena and Emilia Reggio – just west of Bologna. These regions are characterized by hot summer evenings and cool winter nights, which are ideal for the Balsamic aging process – a process that typically occurs in attics on select family estates. Many of these Italian families have been producing their Balsamic since the Renaissance, in accordance with their own secret methods that have taken ages to develop, and which as one author puts it, “remain shrouded in mystery.”

Usually the process of making true Aged Balsamic begins with the harvesting of Trebbiano grapes at their ripest point, though other grapes such as Occcio du Gatto, Spergola, Berzmino, or Lambrusco may be used and added as well. Once harvested, the grapes are then pressed into a juice called “mosto” or “must,” which is then cooked in pots over a direct flame. The “must” is then simmered for 24 to 30 hours, until it becomes an intensely sweet concentrate and reduced in volume by one half or more. During the simmering process, the sugars of the grapes are caramelized. This unfermented juice is then cooked once again and allowed to settle. Per tradition and family method, the unfermented juice is transferred to a “batteria,” which is a set of progressively smaller barrels made of both soft and hard woods such as ash, oak chestnut, cherry, mulberry and juniper depending on the preference of each producer. The “batteria” minimally consists of no less than 3 barrels and typically no more than 7 barrels of various sizes. The barrels impart flavor and color to the concentrate, resulting in an elixir of multilayered character and complexity. 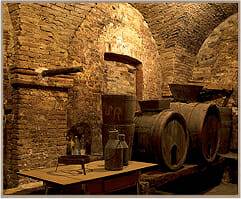 Once placed in the barrels, the aging process begins with alcoholic fermentation and acetic oxidation. The cooked “must” is added to the barrels, along with either an acetobacter, called the “mother,” or a small amount of strong wine vinegar. Yeasts, whicha are either introduced or allowed to develop, convert the natural sugars into alcohol, which is in turn consumed by the acetobacter and converted into vinegar. Because the barrels are filled only to between 66-75 percent capacity, oxidation is then permitted to take place. Each barrel is highly porous and has a large square bunghole covered by cotton cloth to permit maximum oxidation and evaporation. Throughout the year, anywhere from 15 percent to 30 percent of the volume evaporates. Every year, each barrel is then topped off with the contents of the next larger one, and the largest barrel is then replenished with new cooked “must.” Thus, as the years pass, the elixir is transferred into smaller and smaller barrels as the water evaporates, creating mellow, viscous, intensely aromatic, and sweet tasting vinegar. Italian law requires a minimum of 12 years of aging before the vinegar can be considered for approval and sold as aceto balsamico tradizionale.

The process to receive the stamp of approval as “aceto balsamico tradizionale” is rigorous and granted by the respective geographic councils controlling the certification process in both Modena and Reggio. Each year, only about 10 percent of all submissions receive the proper certification and are then permitted to present their Balsamic in specially designed bottles bearing the authentic stamp of the geographic designation. Typically, these certified balsamic retail upwards of $450 for each 8 ounce bottle, while the uncertified balsamic, which is also of outstanding taste and quality, is bottled and infused by a select group of artisans for gourmet and epicurean use.